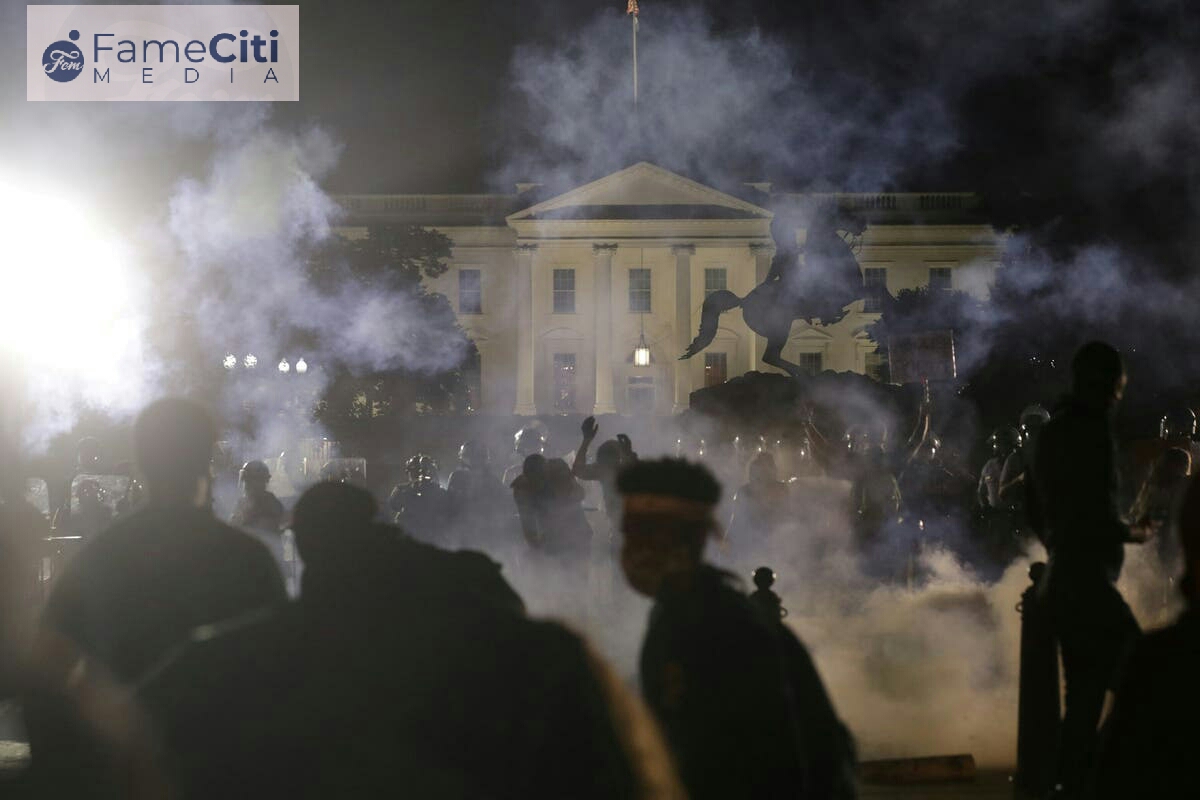 Protests Near White House Spiral Out of Control Again despite the fact that 11 p.m. curfew was imposed by Mayor Muriel E. Bowser and activation of the National Guard, the killing of George Floyd keeps people up as they fueled in anger and protests goes on near the White House which was out of control again on Sunday night.

Some of the demonstrators were being hit in the head with canisters of tear gas while some broke into offices. Others started fires, which may have spread to the basement of St. John’s, the Episcopal Church in which at least every chief executive attend when going back to James Madison, if not for the quick response of the firefighters who quickly put out the flames.

Hundreds surged in front of the White House for a third straight night. Around 8 p.m., there are troops marching across the South Lawn as the President sat indoor, tweeting about law and order.

Demonstrators reclaimed the Lafayette Square that had been the separating line with the police on Saturday night. Teenagers covered a bathroom structure in graffiti like “AMERIKKKA” and they claimed to a top to get a better view. As they get closer to White House police lobbed year gases periodically into the crowd and announced their intent to push the protesters back over a megaphone. But as night fell, they had yet to succeed.

But towards the evening, the protests turned into a repeat of the previous night. The protesters moved back to the H street as police reclaimed ground in the park. There a giant bonfire started I’m front of the St. John’s Church including the bathroom I’m the park was set ablaze. A car burned on the I street. On Sunday, workers were scrambling to secure businesses in the heart of the nation’s capitol. 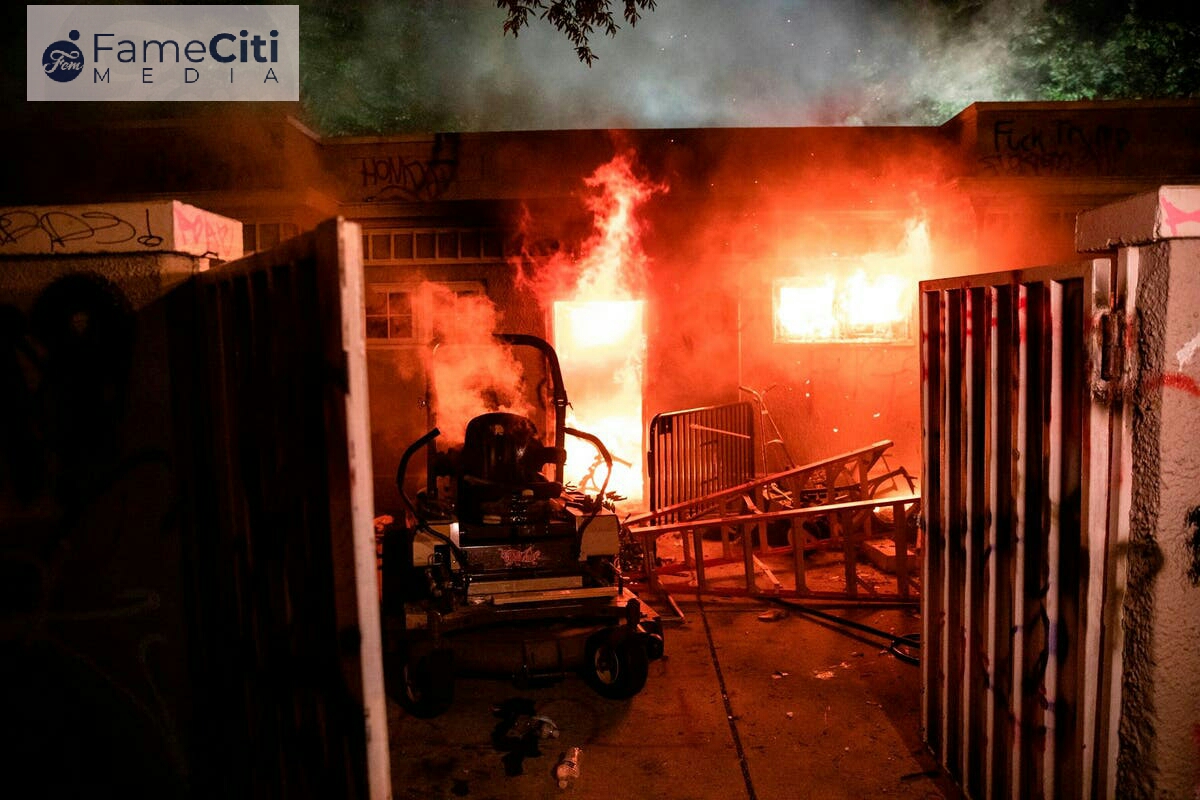 “I was called at two o’clock in the morning and again this morning,” said Bryant Woltz, a glass contractor boarding up the Bombay Club, ordinarily the scene of power lunches between politicians and the media elite. “They said we need all hands on deck; this is an emergency.”

Around the Bombay Club, another restaurant, the Oval Room, was graffitied with “THE RICH AREN’T SAFE ANYMORE!” Nearby at the U.S Chamber of Commerce building, which had been set ablaze and had its windows wrecked, Bill Voge, 35, was hastily spraying gray paint over more graffiti. “We’re trying to recover as best we can from what has happened last night and then tonight it’s supposed to be the same thing, so we’ll probably be back again tomorrow, doing the same thing,” he said, paint roller in hand. 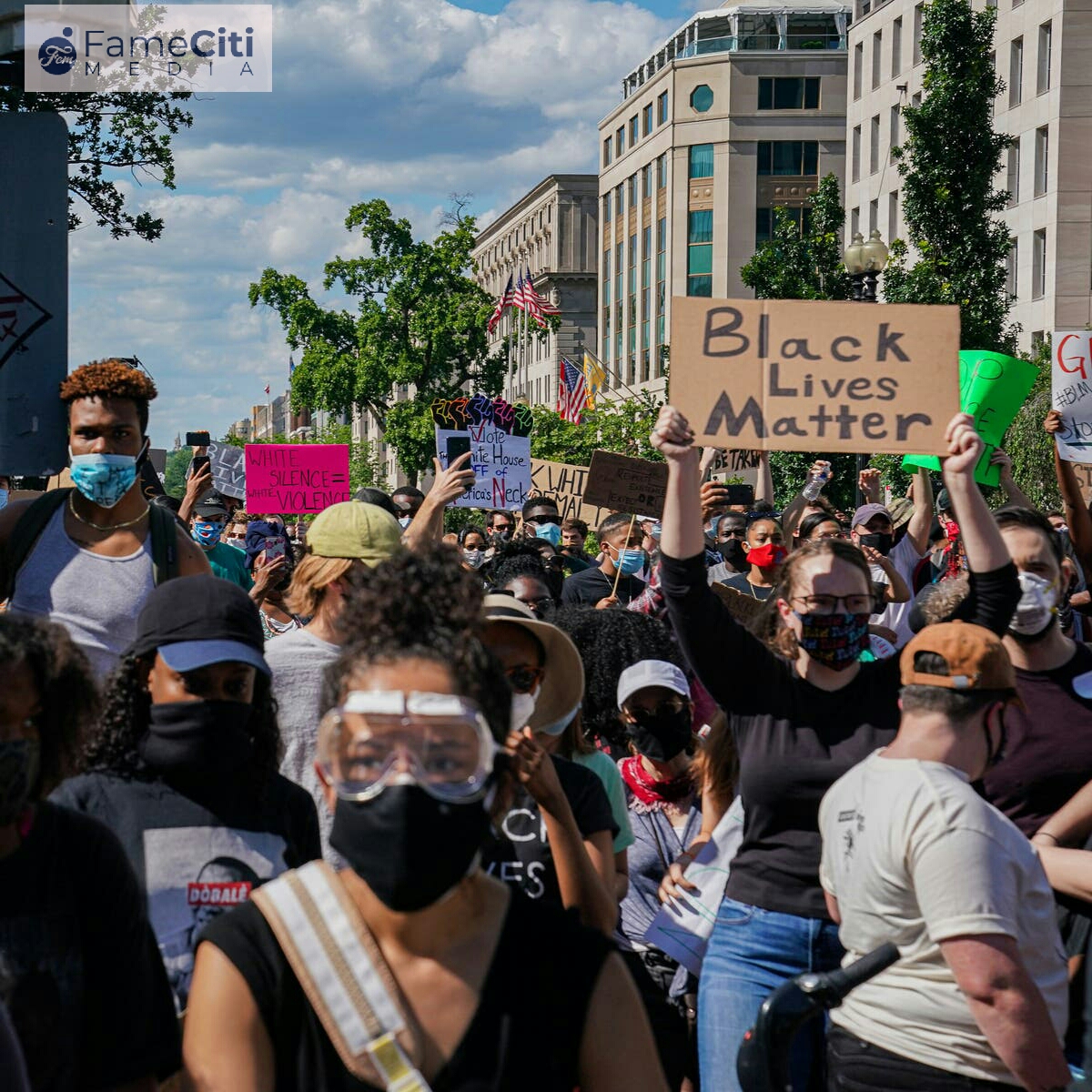 Protests on Saturday began peacefully around 2 p.m., opposite the Justice Department. “We want charges,” an organizer shouted into a megaphone. “We want convictions. No more acquittals. We want these people to be held accountable.” Demonstrators marched down to the National Mall, moved around the Reflecting Pool and came to a stop at the statue of Ulysses S. Grant on horseback. With the Capitol building there in the background, they were chanting“George Floyd!” and the names of other victims that police brutalized, including Philando Castile and Breonna Taylor

Pamela Alston, a 31 year old, an insurance underwriter from Southeast Washington says “we built this country, and it’s time for people to respect us.”
A 26 year old school counselor and Washington native,Jarrell Slade,said: “I’m fed up. I’m tired of going on social media, talking to my family and friends, and having everything be centered on black death.”

A global studies major at the University of Maryland, Baltimore County, Malik Harris,
rented a house in Washington with friends for the weekend to join the demonstration. “I’m supposed to be doing my homework right now for the summer semester,” he said. “But I definitely want to be here for everything.”

Marco Silva, a 28 year old, was driving a “College Hunks” moving service truck when he was swarmed. But he was not bothered. Hopping out to light a cigarette and pump his fist in the air, he said: “I think this is beautiful. What everybody is doing right now is a beautiful thing.”

A significant group of the demonstrators were all white, and they joined with the largely African-American crowd to protest police aggression. 23 aged self-described social media influencer, Cameron McCall helped organize the protest, emphasising on peace, and said: “We’ve seen that we have a strong voice on social media with our generation, and look closely at us now, united, walking, and off our phones. Beyond shoes and clothes and celebrities, we are doing it for a purpose.”

As the day went by, marchers knelt near the National Museum of African American History and Culture for more than 8 minutes silence, around the time that Officer Derek Chauvin’s knee was on the neck Mr. Floyd’s in Minneapolis. As they moved on past the World War II Memorial, they urged tourists to join them. As the sun goes down they rested at the Lincoln Memorial.

President Trump, who returned to the White House on Saturday evening after a day at the Kennedy Space Center in Florida, had suggested on Saturday in a tweet that it would be “MAGA NIGHT AT THE WHITE HOUSE” and that his supporters might turn out in their red “Make America Great Again” caps. But there were no red caps to be seen among the hundreds flooding the H Street.

Around 9 p.m., tensions began between the police and a growing crowd of demonstrators broke out, with demonstrators wrestling the barricades from the police, who in turn threw canisters of tear gas into the many crowds.

“Water with baking soda helps,” said Azzah Davis, 19, who knelt in a nearby alley trying to recover from the gas. “We were protesting, I don’t want to say peacefully, because things were getting out of hand, and the cops were shooting people with rubber bullets. They began to throw mace and people picked it up and threw it back at them.” She added: “It’s very long overdue. We have been peaceful patiently enough.”

A flaming dumpster illuminated the police as some demonstrators lauched bricks and other projectiles their way. Despite the coronavirus pandemic, many in the crowd had no choice but to remove their masks to be able to inhale air, cough and sneeze as the acrid tang of tear gas stirred up and down around the block. 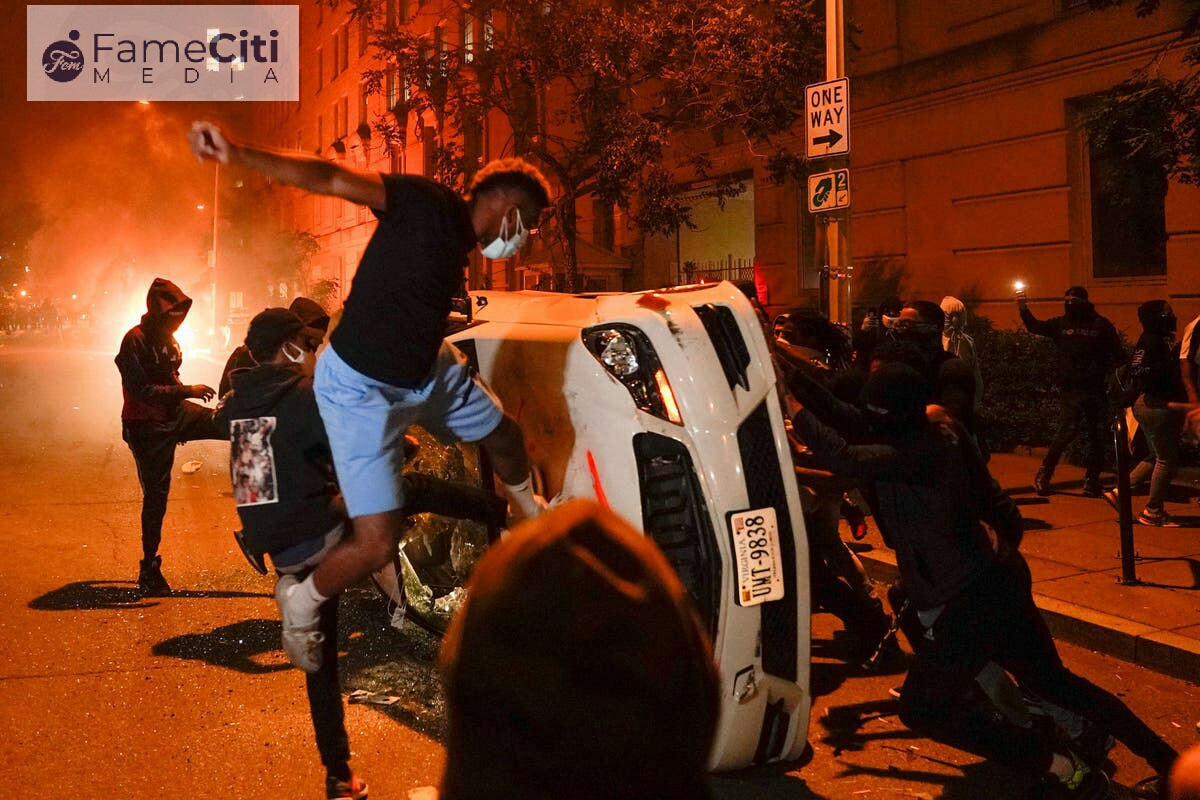 A 27-year-old accountant, Sarah Cooper was holding a sign that mentioned Covid-19. “It’s a systemic issue. Blacks are more likely to die from Covid-19,” she said. After spending three hours in front of the White House, she added, “it’s kind of disorganized, but I think it’s nice that people are still coming out to support for change.”

A Chevy Suburban on I Street was on fire exactly 11 p.m., and the crowds spread out, smashing windows and trying to destroy it as much as they could.

There were already hundreds protesting outside the White House on Sunday at 5 p.m.