Jonathan Lyndale Kirk, known professionally as DaBaby, is an American rapper. After releasing several mixtapes between 2014 and 2018, he rose to mainstream prominence in 2019. Jonathan Lyndale Kirk was born on December 22, 1991, in Cleveland, Ohio. He moved to Charlotte, North Carolina in 1999, where he spent most of his early years. He attended Vance High School (now called Julius L. Chambers High School), where he graduated in 2010. He attended the University of North Carolina at Greensboro for two years, but did not complete his studies, saying he only went to college for his parents’ sake. He grew up listening to Eminem, 50 Cent and Lil Wayne with his two older brothers. 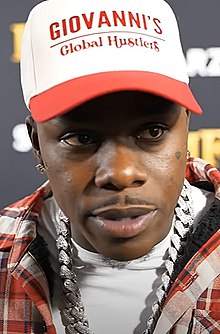 Four years ago, DaBaby signed a deal with Interscope Records that would change his life. He had taken one just eleven weeks before.

At the time, the rapper was a few years shy of global fame. Either for a steady stream of chart topping songs and Grammy nominations, various brawls, or widespread condemnation last summer after making homophobic remarks and comments about people with HIV/AIDS.

Kirk was involved in an incident in Huntersville, North Carolina, where a 19-year-old man was shot in the abdomen and died soon after. He confirmed his involvement in the shooting and said he acted in self-defense. The most serious charges were dropped in March 2019, and he pleaded guilty to carrying a concealed weapon, a misdemeanor.

The footage of DaBaby killing someone at Walmart has been released. pic.twitter.com/iwlOlPx83V

The controversial rapper shot and killed Jaylin Craig in a Walmart. DaBaby swears he acted in self-defense, but never-before-seen footage raises doubts about his story

From the footage, the rapper appears to be the initial aggressor in the situation. This footage made the calling into question DaBaby’s self-defense claim. To Craig’s family, the video footage raises some serious questions.

Craig’s mother, LaWanda Horsley, tells during her son’s death investigations that she feel like they just swept it up under the rug. It was claimed that kirk knows what he did.

Don’t forget to leave your comments