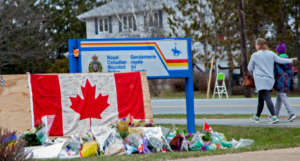 Mass-shooting deaths in Canada rise to 22, Police reported that 22 people were killed after a gunman went on rampage in Novia Scotia in Canada’s deadliest attack to date over the weekend.

The alleged gunman, 51-year-old denturist Gabriel Wortman, was disguised as a police officer and had camouflaged his vehicle to look like a police car.

Police said Wortman had murdered people in many locations around the rural town of Portapique for more than 12 hours and he had not named any of his victims. Citizens were shot in their homes and properties and set on fire. On Monday, the Royal Canadian Mounted Police confirmed they had recovered bodies from some of the fire sites.

A police spokesman reported 22 people as well as the gunman were killed in the attack. Officials also warned that when investigators comb through homes destroyed by the fires, the number of casualties will almost certainly increase.

Officers spread across 16 places in central and northern Nova Scotia including the area where the 12-hour assault started late on Saturday on Portapique Beach Road, where suspect Wortman lived.

Also, on Tuesday, concerns arose about why not give a public emergency alert as the attack proceeded. Given police carrying updates to the attack on Twitter, there were no warnings that would automatically show up on cell phones.

Among those killed was a policeman, residents were warned about locking their doors in the neighborhood and hiding in their basements as the attacks unfolded.

Unlike the rest of the world, the town had been following government advice to stay at home because of the coronavirus pandemic, and when the attack started most of the victims were inside their homes..

Many bodies on Portapique Beach Road were found inside and outside one home, police said.

Remains have also been identified at other locations in Nova Scotia and police suspect that the gunman may have targeted his first victims but then continued the assault by shooting randomly while he was driving around.

According to Royal Canadian Mounted Police Chief Brenda Lucki, Wortman, who is believed to have been acting alone, was not well known to police.

She said that investigators are also investigating the scenes of the crime to decide what weapons were used.

He added: “I never dreamed that I would wake up to the horrible news that an active shooter was on the loose in Nova Scotia when I went to bed last night.” Canadian Prime Minister Justin Trudeau said: “My heart goes out to all those affected in what is a terrible situation.”

This is the deadliest shooting since a gunman murdered 14 people in Quebec in 1989, a disaster that led to Canada’s gun laws being overhauled.

first girl, Malia Obama, was as of late spotted galavanting around the Islington neighborhood of London with her British sweetheart of two years, Rory...
Read more