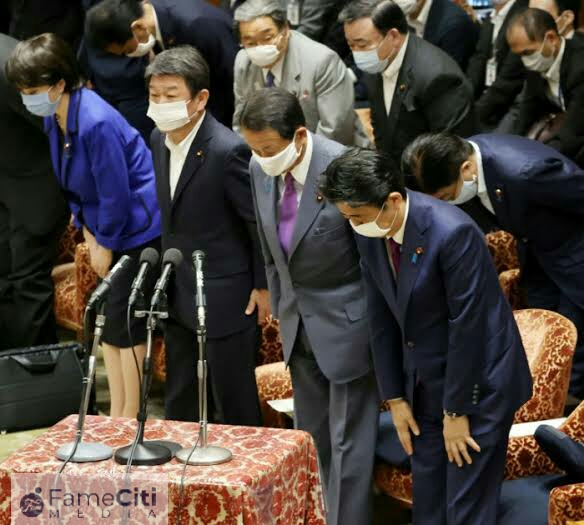 Japan MPs pass record coronavirus budget, an emergency budget worth nearly $300 billion has been approved by the Japan’s powerful lower house of parliament on Wednesday, doubling the scales of measures to improve the world’s third-biggest economy after been tipped into recession due to coronavirus pandemic.

Despite Japan’s relatively low outbreak figures and death toll from the pandemic, consumer spending has slowed to a crawl, causing the first economic slowdown since 2015.

A second exceptional budget of 31.91 trillion yen ($297 billion) has been approved by law makers, including subsidies for smaller businesses and cash handouts for medical workers.

The funds will be sent to the upper house and is widely expected to be enacted as early as Friday.

The cash to be raised by issuing bonds will also be used to help finance rescue programs and loans for companies struggling.

The government said the package ‘s size, including loans and investments in addition to actual financial spending, is worth about 117 trillion yen, almost the same size as the April 30’s first extra budget.
Japan’s overall measures amount to 230 trillion yen when loan schemes are taken into account, combined with that initial stimulus package.

That’s a whopping 40% of GDP, proclaimed by Prime Minister Shinzo Abe as the largest virus program in the world and driving Japan’s debt to GDP ratio up to 257%, said Naoya Oshikubo, senior economist at SuMi TRUST

“It will be worth it to drive the recovery,” said Oshikubo.

“The two supplementary budgets alone should increase real 2020 GDP by three points. In addition, the state of emergency has now been stopped across Japan and the economy is set to improve,” the economist added.

Subsidies to help small businessess pay rent, subsidies for business owners paying leave allowances to their employees, grants to medical workers and grants to help drug and development of vaccine were included in the rescue measures.

Japan had recorded coronavirus of 17,251 infections and 919 death as of Tuesday, a portion of the toll seen in global hotspots.
But a surge in infections prompted the Prime Minister to declare a nationwide lockdown, handing regional governors the power to ask individuals to stay in their respective homes and call for businesses to shutdown.

Country’s lockdown was eased last month but said it would take “quite a long time” for the country to fully return back to normal.

The first additional budget passed on April 30 included cash handouts for each resident and money to help boost the production of much-needed medical workers masks.

Reason Behind Bill Withers Death Revealed, Bill Withers passed on at the age of 81 in the wake of enduring a cardiopulmonary attack, which...
Read more